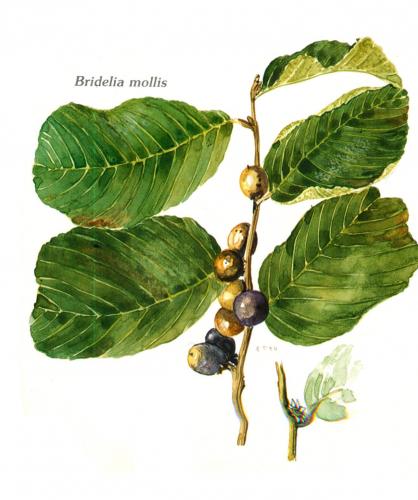 Etymology of Bridelia:
For Samuel Elisée von Bridel (1761–1828), Swiss botanist, bryologist, poet, muscologist and librarian, and author of Bryologia universa. He studied at the University of Lausanne and later went to Gotha (Thuringia, Germany), where hetaught the sovereign’s children, princes August and Friedrich von Sachsen-Gotha. He was one of the foremost bryological leaders of his time, and also published the two-volume work entitled Muscologia recentiorum. Most of his moss herbarium was acquired by the Botanical Museum of Berlin and fortunately escaped destruction during an air raid in World War II.
Etymology of mollis: