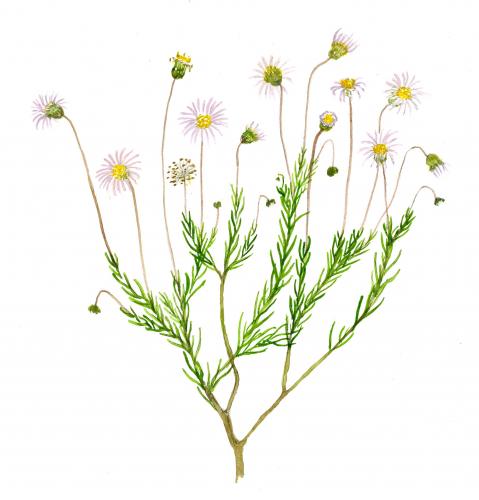 Etymology of Felicia:
Origin uncertain. La. felix = happy, cheerful, though in the neuter plural form felicia = happy things; possibly a reference to the bright flowers. Other sources vaguely refer to a mysterious German official in Regensburg called Felix who died in 1846 but speculatively and more probably for the Italian Fortunato Bartolomeo de Felice (1723–1789), an Italian scholar established in Yverdon who led the European team that wrote the Yverdon Encyclopedia, published between 1770 and 1780 in 58 quarto volumes. This superseded the Parisian Encyclopedie of Diderot and d’Alembert published between 1751 and 1772.
Etymology of hyssopifolia:

From the Latin folius = 'leaves' and the resemblance to the medicinal herb hyssop, Hyssopus officionalis